Our experienced training team are highly vested in ensuring you will better understand the Adobe software.

Our trainers are not only Adobe-certified experts and instructors, they are also skilled in delivering our Accelerated learning framework so you will remember much more than a standard training course remotely or in our classroom. 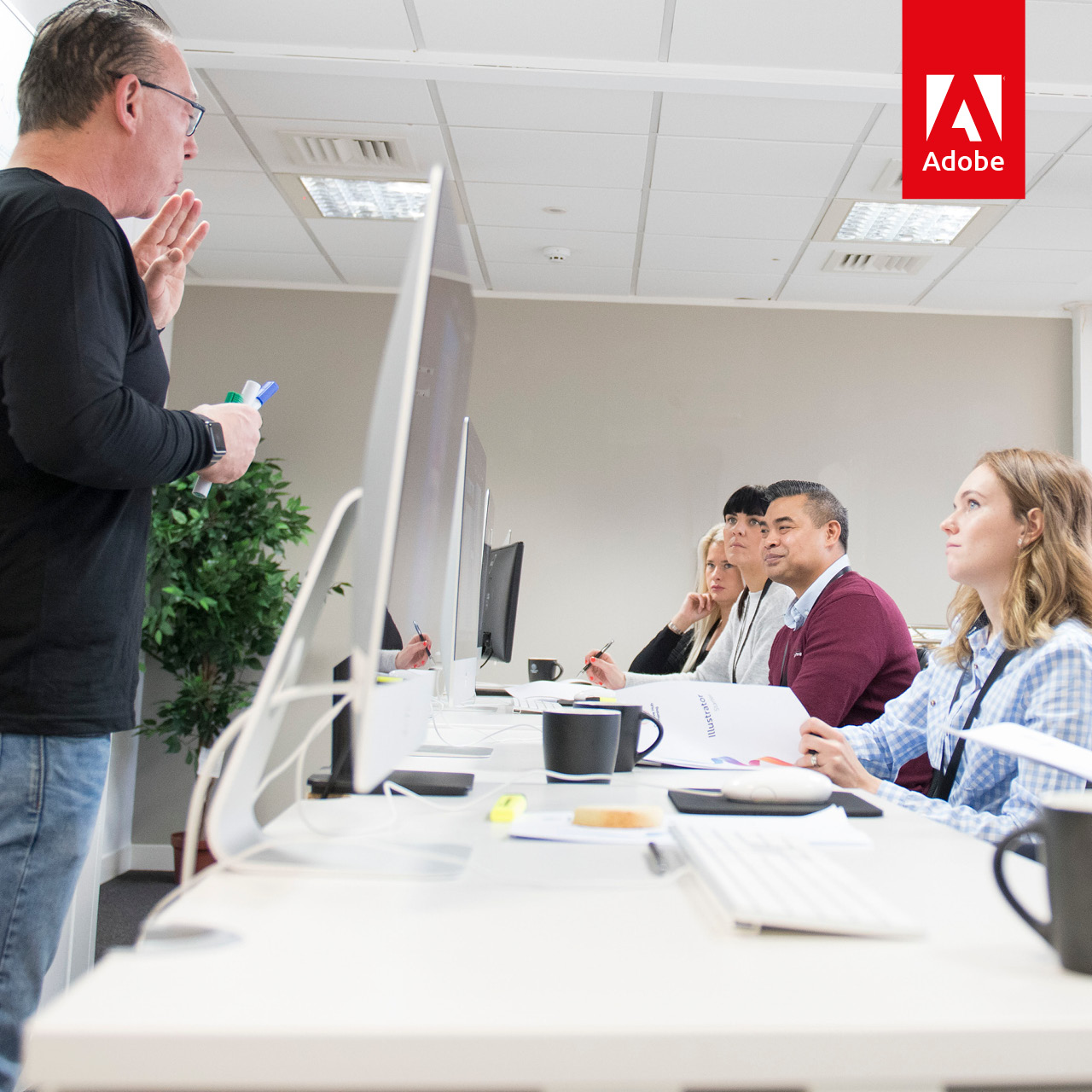 Our standards are high, so you can be safe in the knowledge that the training you receive will be first class. If you're in any doubt, we can send you an authenticated email from Adobe that confirms the credentials of any of our trainers. 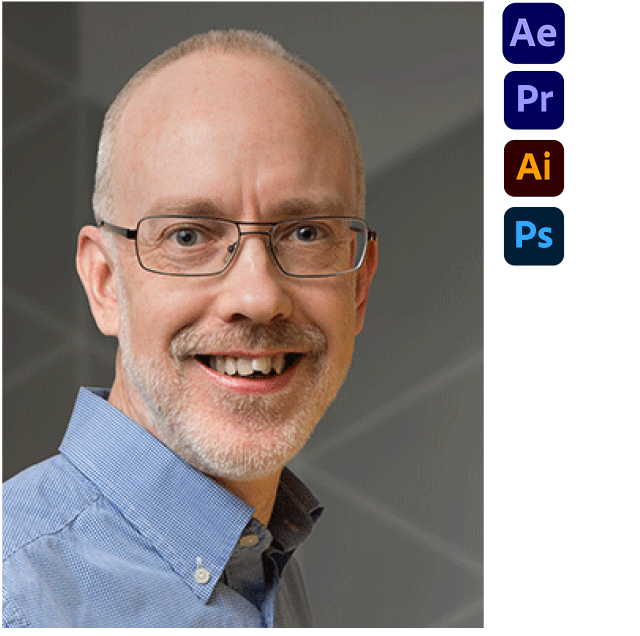 Mike is a highly experienced designer, visual creative and has been a software trainer for over 24 years. He also runs his own studio focused on stills and moving imagery, serving high quality clients across the UK, Europe and USA. He has a broad and deep skill set across design, illustration, photography, 3D CGI and motion graphics.

Favourite film? The General - Buston Keaton
Favourite food? Traditional roast dinner
Person you most admire? Leonardo Da Vinci
Person you would like to be? Someone who could play jazz really well :)
Favourite biscuit? Anything my daughter bakes! 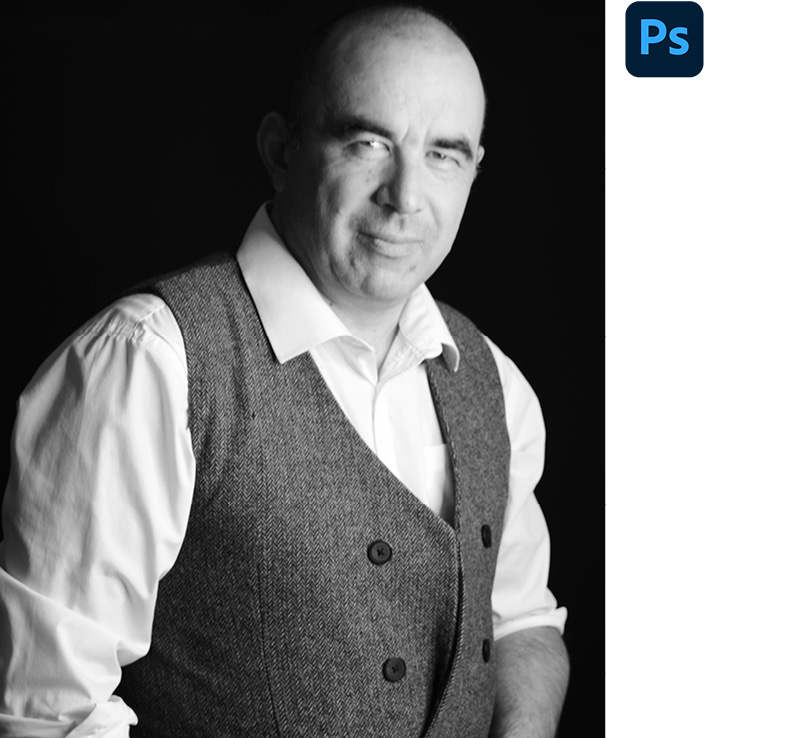 Steve has been a professional photographer for over 32 years now and a user of Photoshop since 2008. Steve says "Education has always been in my blood and there is nothing better than doing the job you love and sharing your knowledge with others. Working with Certitec is my dream job as I came to them for my first Adobe certification and now I'm back as an instructor."

Favourite film? The General - Cockneys vs Zombies
Favourite food? Cockles
Person you most admire? Mawgan Daniels (kid on Child Genius 2016, real down to earth lad, had the pleasure of working with him last year)
Person you would like to be? I'm happy in my own skin
Favourite biscuit? Jaffa Cake (you just can't eat one, you have to eat the whole packet) 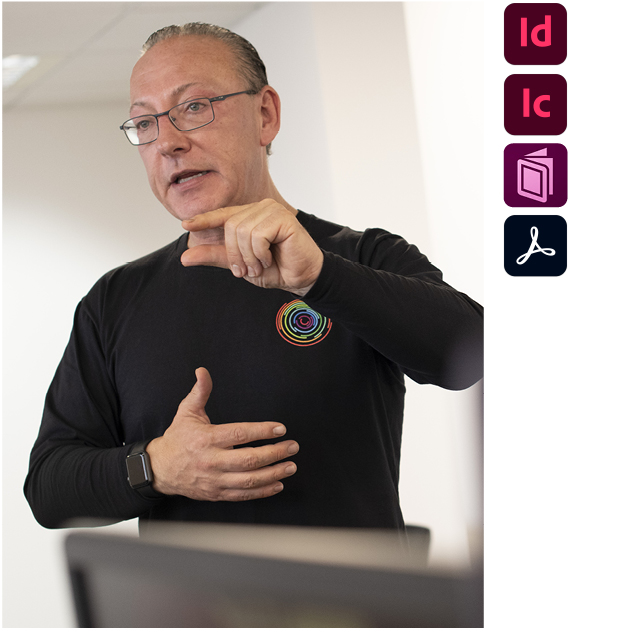 Jon is our training director and manages our training team. He has been utilising Adobe software in the quick-print, newspaper and magazine print markets since 1987. He has been Adobe-certified (first accreditation was Acrobat) since 1999. Jon has presented at European Seybold Seminars and other events including Adobe Live, Digital Solutions, PIRA, Pre-Press Strategies and the Publishing Expo. Jon is a featured presenter within Adobe's Acrobat Usergroup and a senior Adobe presenter within the official UK Consultancy Project.

Favourite film? Interstellar (the multiple realities scene)
Favourite food? Vietnamese Pho
Person you most admire? Richard Bandler and John Grinde – the founders of NLP
Person you would like to be? I am looking forward to the next 'me' on a meta physical level
Favourite biscuit? The Certitec chocolate orange biscuits in our training facility 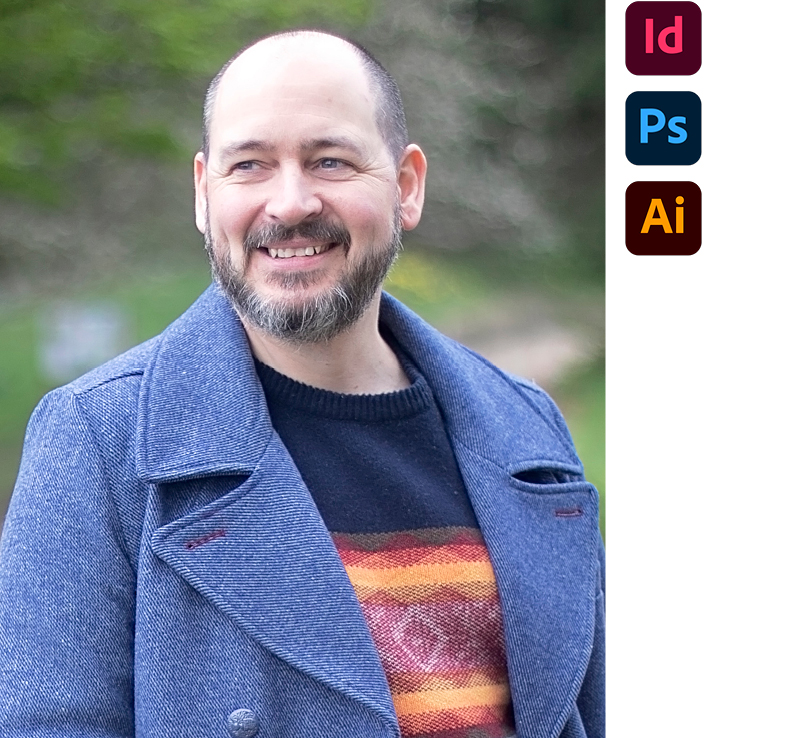 Gary is an award-winning graphic designer with over 25 years of industry experience delivering projects for clients such as Virgin Atlantic and The London Science Museum. Gary has worked across several disciplines, including 3D visualisation, front-end web design, and print. He first discovered a passion for knowledge sharing as part of his role as a Creative Director managing multi-discipline design teams. Gary has written several books on Photoshop, Illustrator and InDesign and led creativity programmes for several digital agencies. 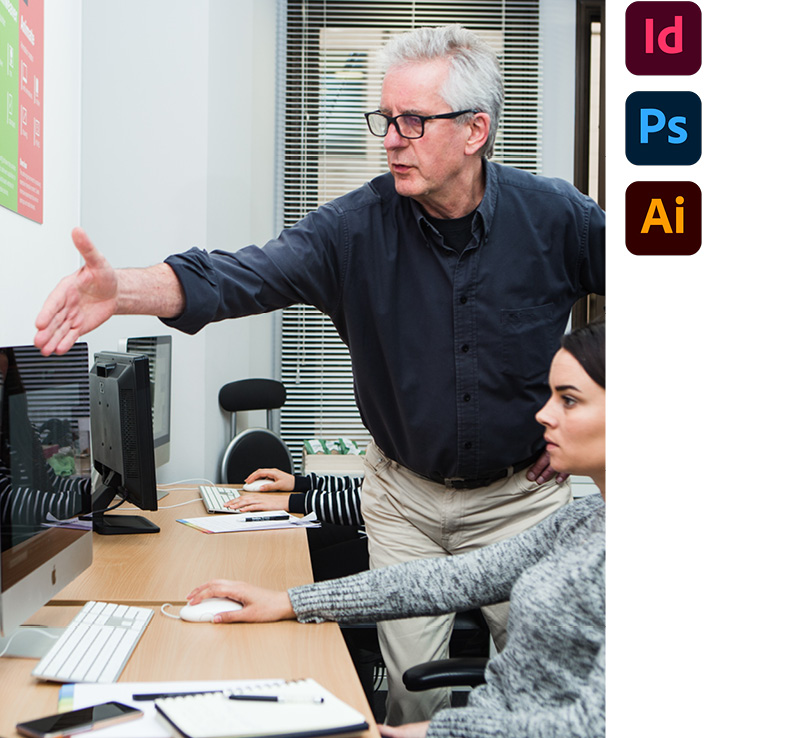 Richard Bird is an Associate of the Learning and Performance Institute (TAP accredited) and is an Adobe Certified Expert and Instructor. Richard has gained his 30+ years experience in the design industry, starting at the London College of Printing followed by a long career as a magazine designer and art editor. Later on switching to the advertising industry, he made a name as a freelance typographer and studio manager with several of the larger agencies. A trainer for 15 years, he enjoys bringing his wealth of knowledge and experience to others.

Favourite film? Good Will Hunting
Favourite food? Seafood
Person you most admire? Lao Tsu
Person you would like to be? Dalai Lama
Favourite biscuit? Anything with chocolate 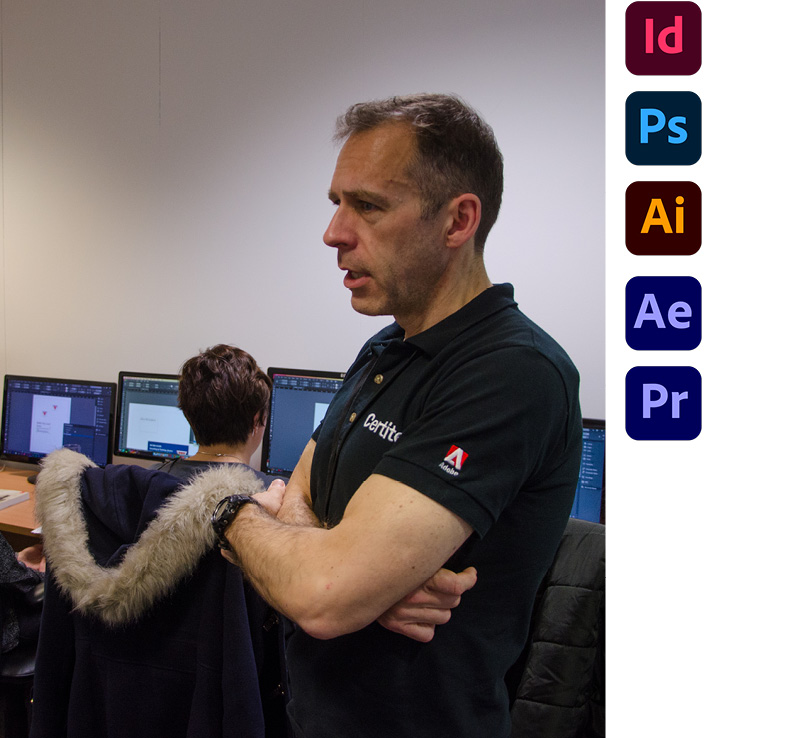 Alistair was a magazine production editor before launching a freelance career in technical writing within the fields of digital imaging and publishing production. For many years, he was the contributing editor for publishing tech at MacUser and went on to co-author a series of how-to books including 'InDesign Essentials' and the best-selling 'Digital Designer's Bible'. Adobe-certified since 2002, he specialises in digital and print production workflows, and was twice a finalist at the Digital Magazine Awards. 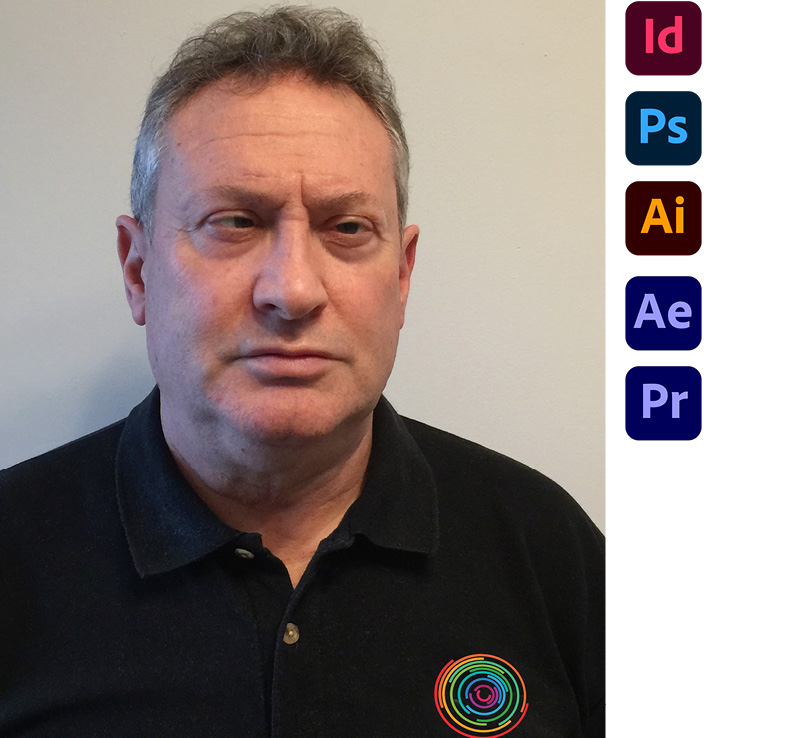 A graphic and web designer and Adobe trainer, Terry has worked in the design industry for over 35 years. Building up a wide variety of design skills, his areas of expertise include: visualising, art direction, catalogues, database publishing in InDesign, and technical Illustration. He has specialised in digital graphics since 1991. Within six months he started to share his skills and soon found himself training others, alongside being a designer, and has done so ever since. Terry has since formalised his training qualifications and is a CompTIA CTT+ technical trainer alongside his Adobe-certified Instructor status.

Favourite film? Blade Runner (the original film noir cut) and Star Wars
Favourite food? Chinese and Italian
Person you most admire? Gill – my wife
Person you would like to be? The best version of ME I can be
Favourite biscuit? Dark chocolate coated ones 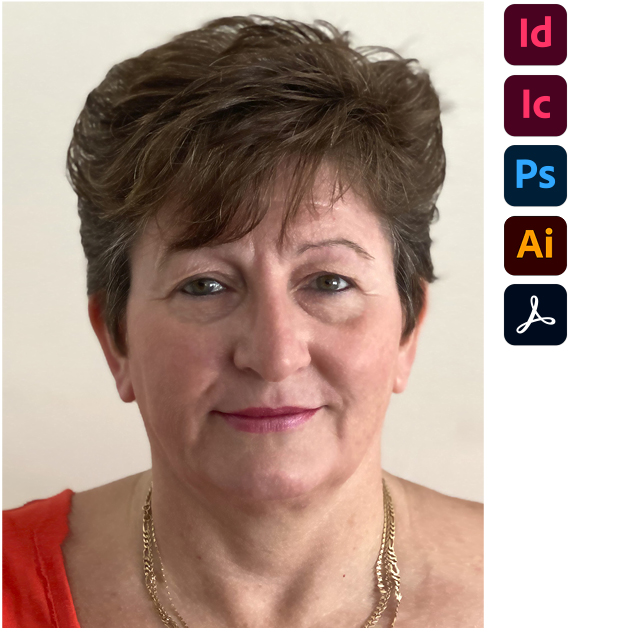 One of the first women in the UK to have served a traditional four year apprenticeship in the print industry back in the late 70s when it was a male dominated skilled trade. She has over 35 years extensive ‘real world’ experience as a typesetter, artworker, retoucher, designer, studio manager and technical consultant in the print and graphic arts industry and has provided training for some of the country’s largest organisations including British Airways, GlaxoSmithKline, Rolls Royce, Barclays Bank, HSBC, Ernst & Young and most national newspapers. Originally from Yorkshire - her claim to fame is that she started her career on the same local paper as Michael Parkinson!

Favourite film? So many I couldn’t possibly pick one
Favourite food? Japanese (it’s not just raw fish!)
Person you most admire? Peter Heppell, my choir's Musical Director's Dad. Former Chindit in Burma in WWII and probably the oldest roadie in the world - at 99 years young!!
Person you would like to be? Me 32 years younger but with the knowledge and life experience I have now

“I found the accelerated learning methodology an extremely powerful way to retain information in a training course. 10/10 and very pleased with the outcome!”

“In a nutshell – it was fantastic and cannot praise you enough!”

“I was impressed with Certitec every step of the way. Their professionalism shone through and I am thoroughly happy with my experience.”

“The trainers, equipment, location and learning structure was impeciable! Thank you.”

“It can be described as an exchange of knowledge – I am truly thankful.”

“I loved the way in which the trainer was able to relay what we did back to us for better memory retention. It was quite extraordinary and memorable for sure.”

“There was not a single question which our trainer could not answer. The course flowed very well and recapping each session worked superbly. Thank you.”

“It is the first ever computer training course I attended where they used storytelling to relax us, which helped me especially absorb more information. Fantastic.”

Who we’ve worked with

Be part of the Certitec community and discover tips, tricks, discounts and more